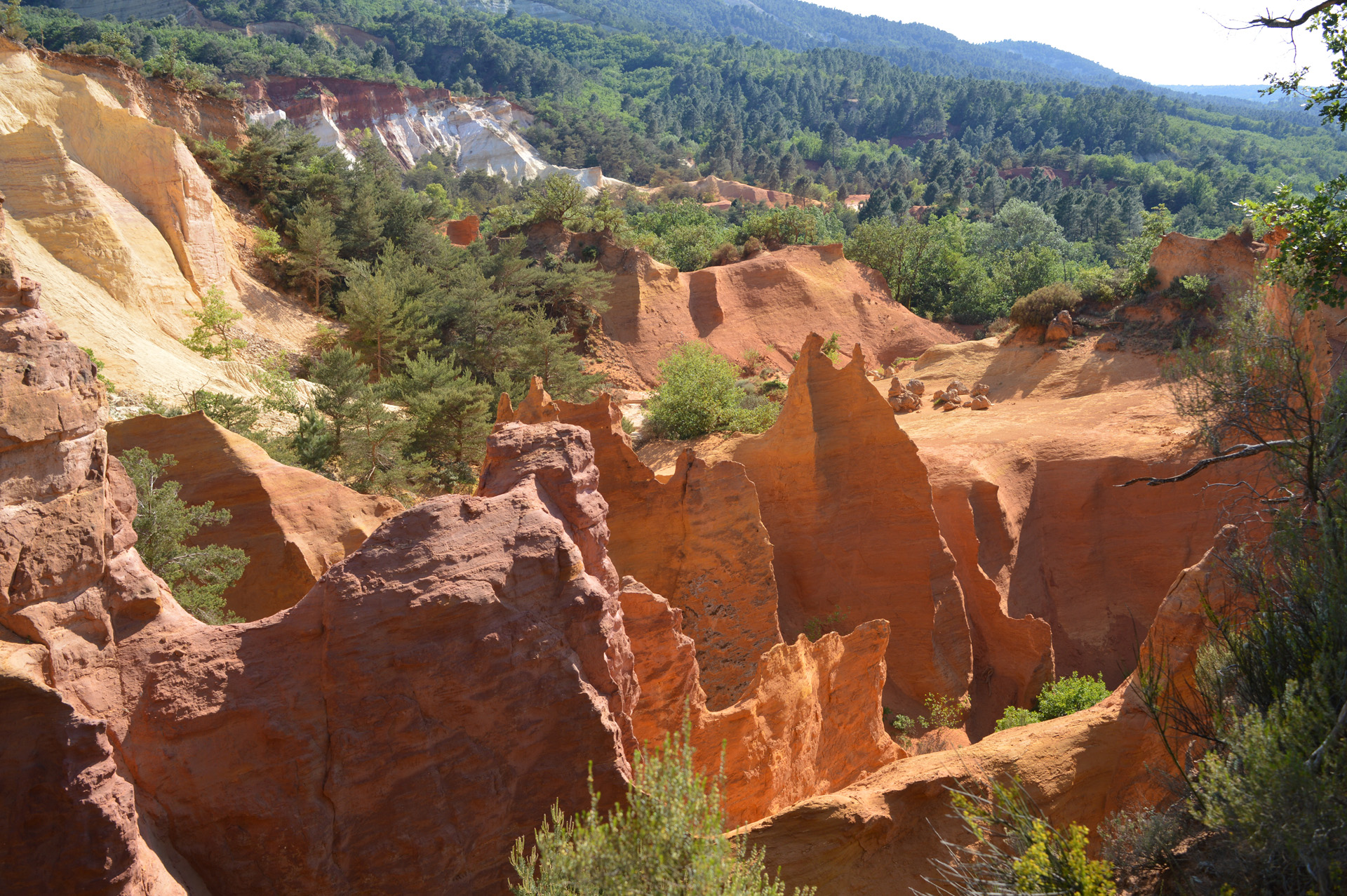 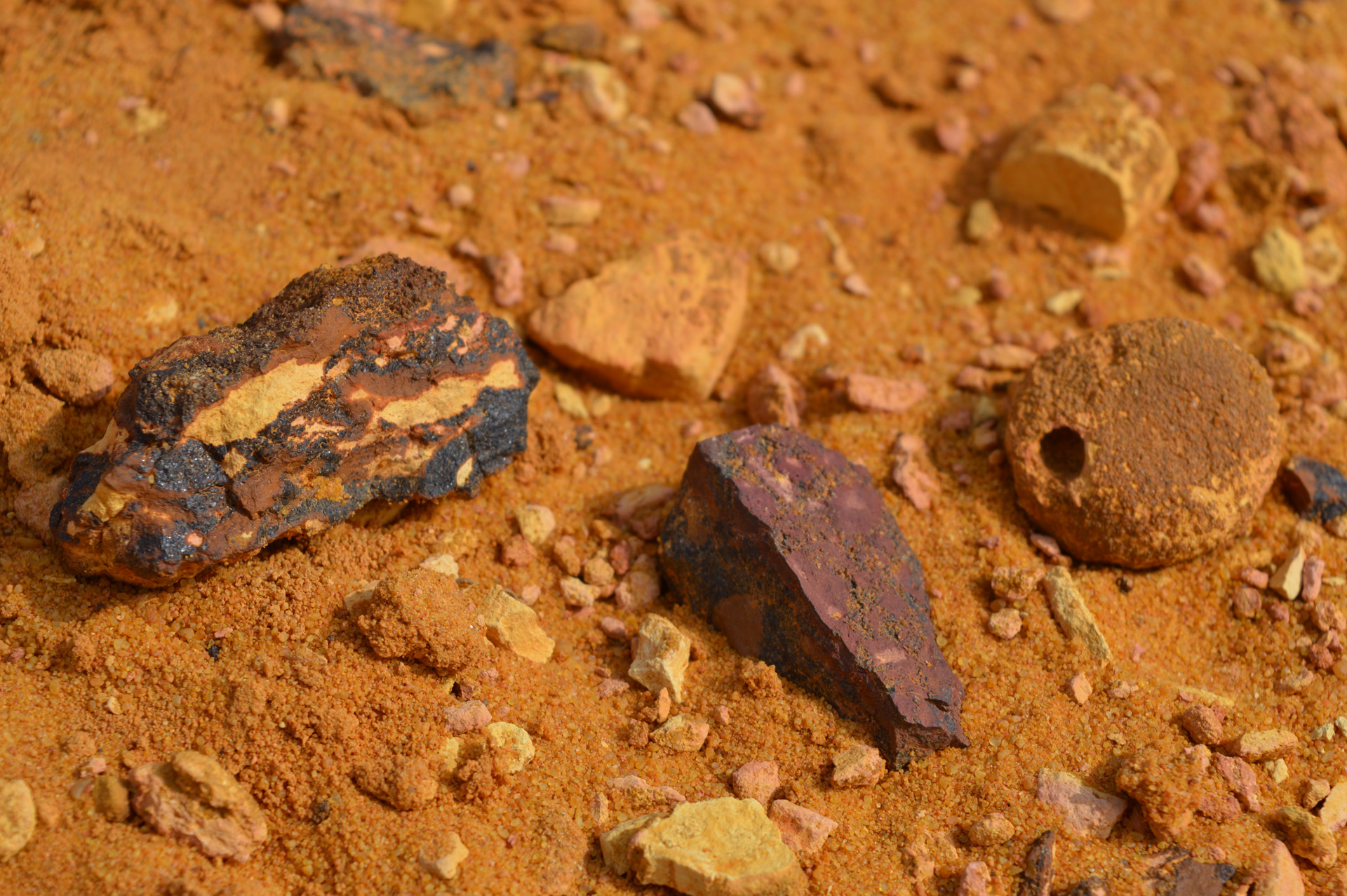 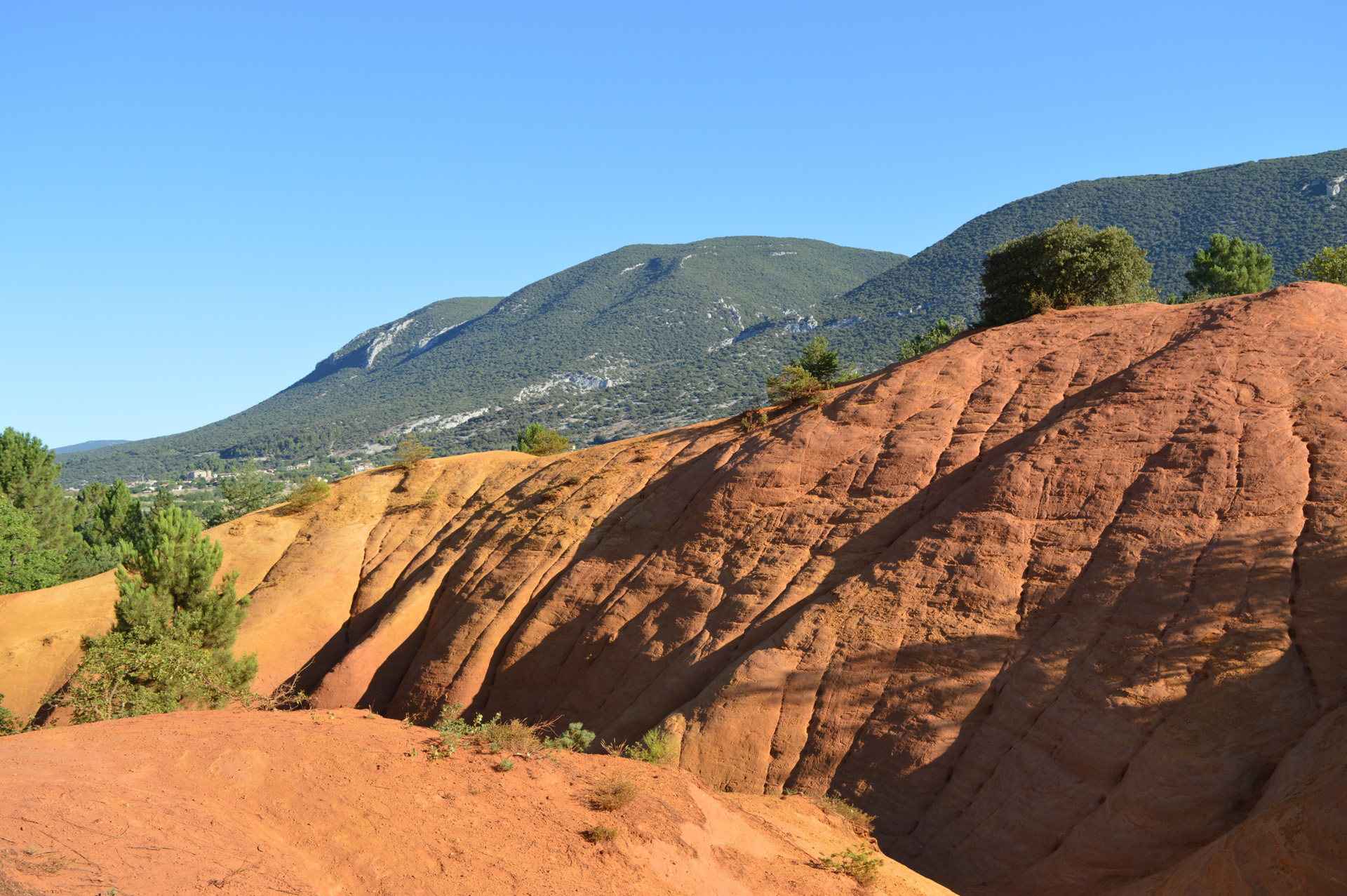 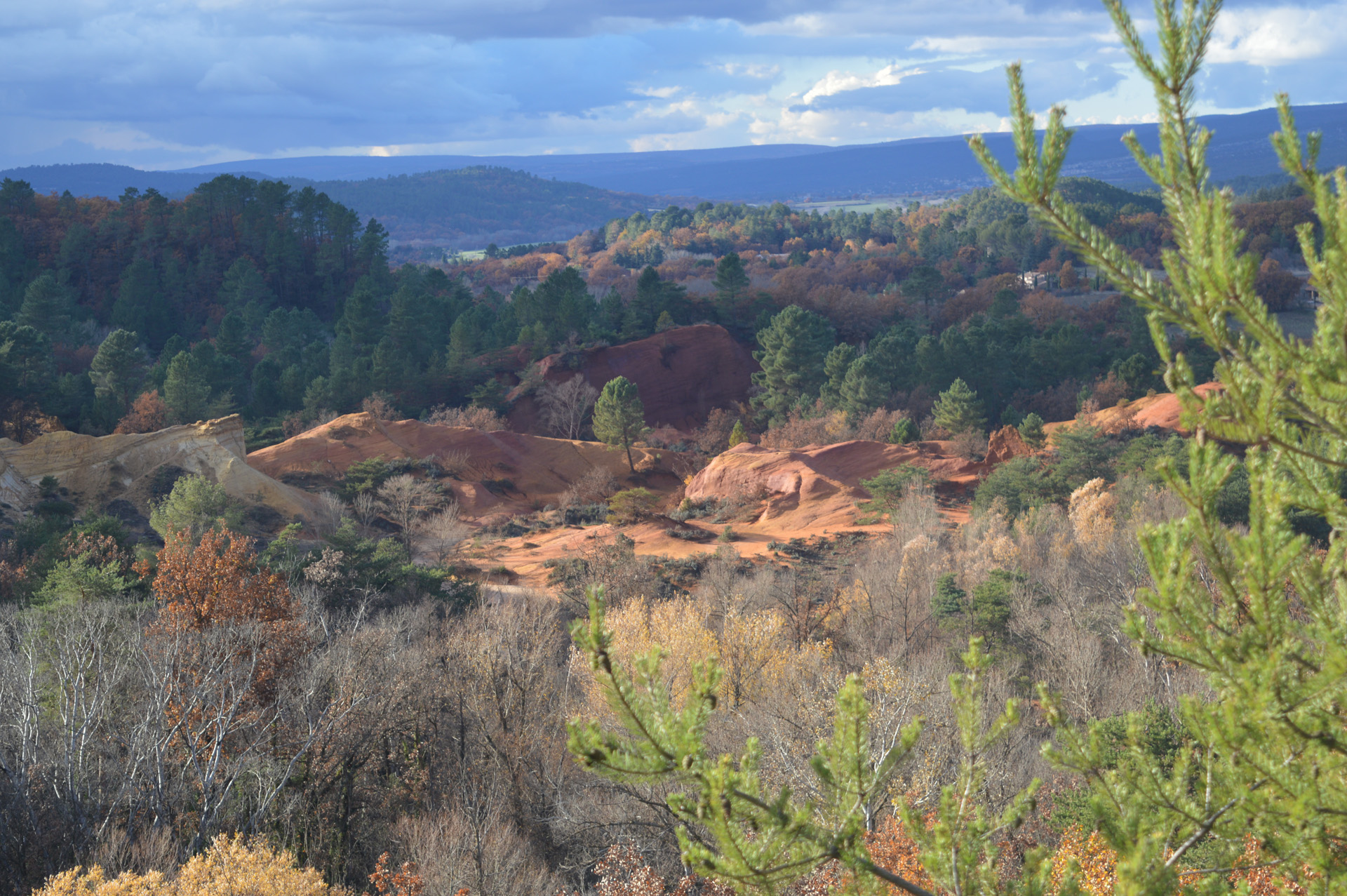 The Colorado Provencal is a former ochre quarry. The first sod was turned in 1871, the last washing in 1993 by Roger Arnaud. The site is situated on private property, the owners being both the Mairie (Village Council) and around 150 private landholders, the heirs of the ocriers!   Entirely fashioned by the hands of the ochre workers, you will discover the quarry faces, basins and water supply pipes and other vestiges of an industrial past. The Colorado of Rustrel Association is the manager of this exceptional site, listed as a historical monument under the Act of 1930. The Association welcomes you to explore two marked trails all year round.

These prices include: parking, a map of the tracks and explanation of the site!
5€
car
2€
motorbike
8€
campervan
12€
minibus (9-12 seats)
30€
bus/coach
2€
site map if you arrive on foot or by bicycle
In 2016 your entry fee covers the following 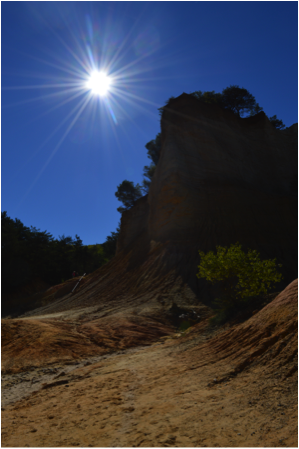 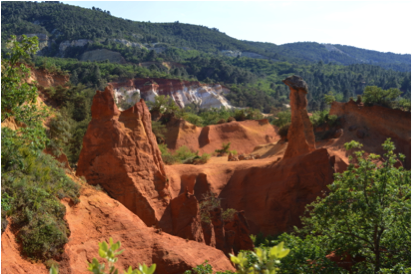 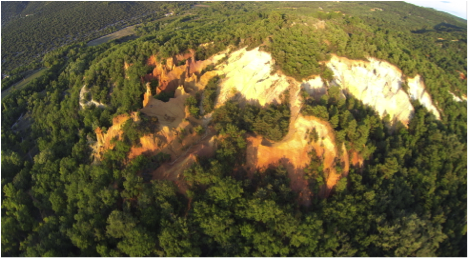 Attention: for your safety you must stay on the formed paths, marked by the Colorado of Rustrel Association on the site map available on entry.

Please supervise young children, especially near the numerous quarry faces which can be many metres high.

Not recommended for prams, bring your baby carrier!

The association was created in 2009, following the reunification of the two car parks at the beginning of the walking tracks.

Representatives of the ADEP (Property Defense Association) and members of Rustrel Village Council are working together to create a safe site for you to enjoy and so that your visit may be as agreeable as possible.

Thank you for contacting us, we will get back to you as soon as possible.
Sorry, but we were not able to send your message, please try again later ...
Leaving your e-mail will provide you access to:
Whatever your project please don't hesitate to contact us, giving us a brief description of your project, and we will guide you through the Colorado to find the perfect location for your production.
For a successful production or shooting, contact us beforehand.

The internal regulations of the Colorado of Rustrel Association forbid access to the site on bicycles and horseback. For further information please contact us.

Colorado of Rustrel Association reserves the right to close the site in the case of dangerous situations.

Village Council regulations forbid access to the Cheminée de Fées (fairy’s chimneys), be careful and do not pass the barriers.

Forest area:  Prefectoral regulation of Vaucluse. As such foot traffic is regulated during the summer months.

Site listed under the Act of 1930 (Historical Monuments) at DREAL

Géosite (site of geological interest), since 7 March 2017, the Colorado Provencal is a UNESCO geoparc.

Reminder: if you leave the marked trails you may put yourself in danger.

Over time variations in temperature, coupled with the increasing acidity of rainwater combined to erode minerals from the ancient granitic rocks of the Massif Centrale and produce both:

- Clays by dissolution of feldspars and micas

- Siliceous sands, by liberation and fragmentation of quartz.

While some larger residues form the granitic rocks were washed to the coast and deposited in ancient river estuaries (in the form of gravels and larger pebbles), the finer particles – fine sands, silts and clays reached the open sea.

These were then carried by ocean currents, flowing South East, and were deposited to form an immense sandbank parallel to the coast, which was in this period as far north as Montelimar.

Today we can find this deposit covering an area more than 100km long, several tens of km wide and sixty metres thick and extending from the southern Ardeche (Departement 07) towards the Var (Departement 83).

This sandbank, shaped by the currents and geological time, eventually formed 3 distinct deposits which are now mined in the Vaucluse: for glassmaking sand near Entraigues, for ochre in the region of Apt between Roussillon and Rustrel and for bauxite towards the Var.

The ochres of Vaucluse are remarkable and unique because they required the intervention of animal, vegetable and mineral realms coupled with the slow inexorable forces of geological upheaval.

The clay component of the ochre comes from the mineral realm:

The raw material of the ochre comes from the erosion and recombination of clay components of granitic minerals in the form of clays, which result in the formation of kaolin, made from oxygen, aluminium and silicone.

The colour is born from the animal realm:

The colours come from an unusual quantity of iron that was extracted from seawater, concentrated and buried in the excretions of crustaceans which lived on the sandbank during a period when the sea was warm and shallow. The iron then combined with the existing minerals to form a highly ferrous grey-green clay, called glauconie.

The transformation of the clay, its colouration and the fixing of those colours were the product of the vegetable realm:

Following an uplift of the sea floor the sandbank was covered by a saline mangrove swamp and the decomposition of the mangrove leaves led to an increase in humic acid.  Glauconie was transformed into kaolin and coloured by hydroxides and oxides of iron produced by the action of the humic acids.

Finally due to a progressive drying and repeated exposure of the sands to the rain and the open air in a climate first tropical and then becoming more and more dry, the iron oxidised, migrated and was fixed. In the process the iron coloured the ochre of the whole massif in tints ranging from yellow to red, passing through all the shades of orange to black-violet due to the laterisation of the soil, which leached some ochres of their iron to create the “white ochres”. This process also created a ferrous crust, which was later mined to feed the blast furnaces for the production of iron.

Further south this lateritic alteration process of kaolin continued to such an extent that the siliceous earths which composes the ochres was completely dissolved leaving only iron and aluminium, in the form of bauxite, which was mined in the Var for the production of aluminium.

Named “the hills of a thousand colours” or “The Colorado in Provence (Colorado Provençal)”, the exceptional landscape of the Rustrel Ochres are the result of the combined work of humans and nature.

The work of nature

230 million years ago Provence was covered by the sea. The sediments which accumulated on the sea bottom formed the white limestone of the region. When the sea became deeper - around 100 million years ago – green siliceous-clay sediments covered the limestone. Ten million years later, following the retreat of the sea, tropical rainfall altered these sandy sediments. The iron oxide contained in the sediment was concentrated and caused the crystallisation of clay minerals, to which the yellow and red oxides became bound. The ochre ore is therefore a type of clay charged with iron oxide, mixed with a high proportion (80-90%) of sand.

For two centuries the ocriers (ochre miners) of the district of Apt extracted and refined the ochres to produce a range of pigments exported to all the continents. The ochre deposit of the Apt district covers a band of country running 25km from west to east, between the villages of Rousillon and Gignac. Begun at Rousillon towards the end of the 18th Century, the mining of ochres remained a small-scale industry until the arrival of the railway in 1880. The golden age of ochre mining lasted from 1890 to 1930. The economic crash of 1929, the development of synthetic pigments and the closure of certain markets led to an irreversible decline. Today only the Societe des Ocres de France continues to mine ochre in the Apt district, combining traditional methods with modern techniques.

The extraction of ochre sands is done either in open cut quarries or in subterranean galleries. At Rustrel, extraction was done mostly in open cuts, although some mines had galleries, notably beneath the hill of Trébaillon. Once the ore was extracted, the ochre was separated from the sand using techniques of washing and settling. At the end of the washery the pigment laden water was run into evaporation ponds. When these were filled to depth of 30-40cm with pigment, the contents were cut into bricks, which when dried and sent to the factory for crushing and screening. Once refined the ochres from Rustrel and the Apt district were exported to the four corners of the world.

The beginning of the Rustrelian venture

Ochre mining at Rustrel began in 1871. The first ocrier, Jean Allemand, nicknamed “Ochre Jean”, refined his ochres in the former flour mills of the iron foundry in the Saint-Pierre quarter, called “the bottom foundry”.

At Rustrel the extraction was always done using artisanal methods, even at the height of production. The bulldozer did not replace the pick and shovel until recently, when the production had already dropped by a factor of 20. Quite often the ocriers of Rustrel were also farmers, because the two activities were complementary over the year. Because of the numerous risks associated with mines and quarries, the activity was quickly regulated and each new site had to be officially approved. The archived documents allow us to follow the history of the ochre mining industry of Rustrel. 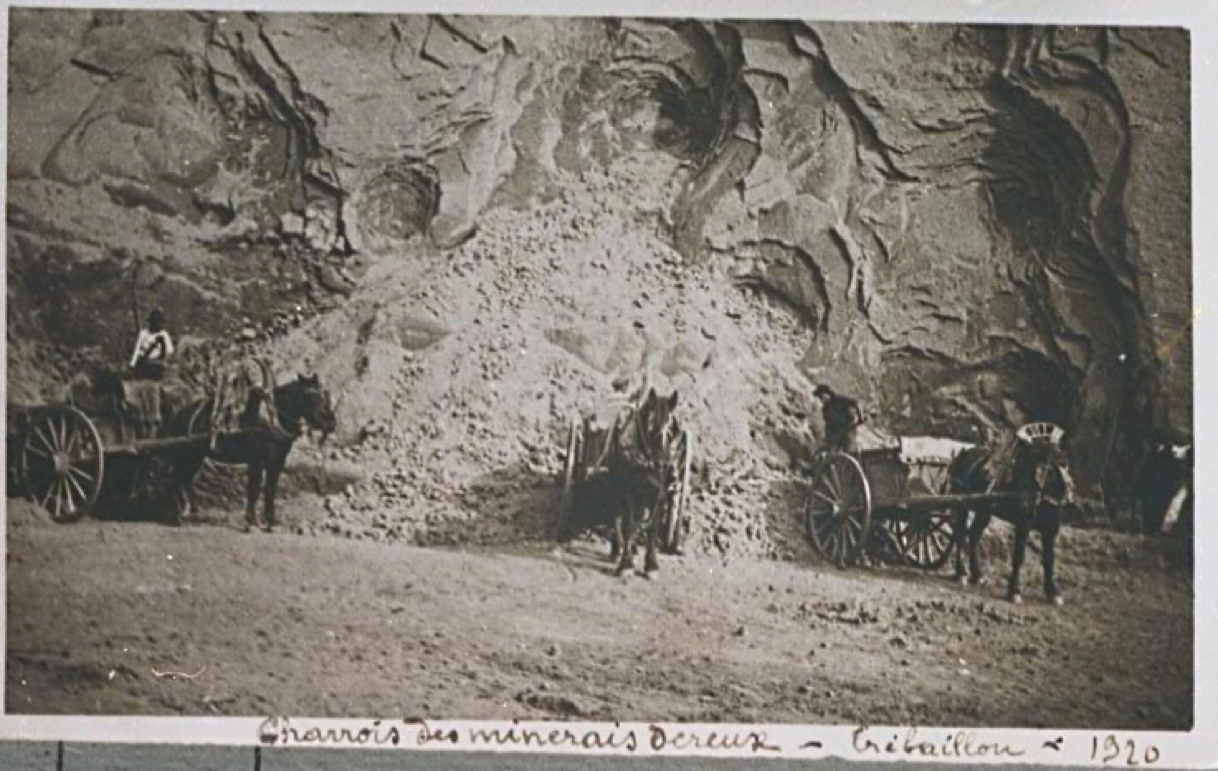 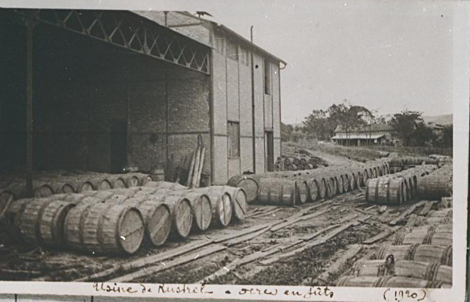 Important dates in the mining of ochre

Following the example of Jean Allemand, many mines were opened at Rustrel. From the start of the 1880s a market sprang up following the arrival of the railway in the Apt district in 1876, and the quarries multiplied. By 1885 12 sites were being mined at Rustrel and mining kept up a steady rhythm till the end of the 19th Century and into beginning of the 20th. In 1900 Rustrel had 10 mine sites and in 1925 22 sites were mined by 84 workers.

As elsewhere in the Apt district the ochre industry declined after the 1930s. After the Second World War the sites were progressively closed. The last stroke of work was done by Roger Arnaud in 1991.

Evidence of the history of mining

Numerous vestiges of the ochre industry can be seen scattered through the Colorado Provençal: channels, settling and evaporation ponds, brick sheds sheltering the motors and pumps which drove the ochre washeries... The first flue-gas powered engine was installed at Rustrel in 1895.

Old wagons remind us of the importance of transport of the ochre from the mine to the washery and from washery to factory. Transport was managed differently in each period and by each enterprise: by horse-drawn wagons, then by lorry and tip-trailer. During the 20s and 30s some transport was on rails drawn by horses or a small locomotive.

‍A site of industry, of nature and tourism

The Colorado of Rustrel and the rest of the ochre massif in the Apt district constitute are listed under the Natural Heritage Law of 2nd May 1930. Since the end of ochre mining, nature has taken over and the landscape evolves constantly under the effects of erosion. The ochre deposits are also special places where a unique flora and fauna have developed.

Today there is another venture in progress at the Rustrel Colorado: that of the listing of the site as a Grand Site de France (Great Sites of France) for the whole of the ochre massif of the Apt district. This communal process comes from the wish to preserve the industrial and natural heritage of the site whilst keeping it open for all to discover and enjoy.